Returning to judge the 2021 Villa Louis Carriage Classic, Mrs. Karen Homer-Brown has a long and storied equestrian career. She began showing horses in leadline classes over 50 years ago. As a youth rider, she showed both saddle seat and stock seat equitation. As a youth rider, she would often win grand champion honors over adults in riding classes. Professionally trained in nursing and auctioneering, Homer-Brown later went on to work as a trainer, groom, and conditioner for horses including Arabians, Morgans, Saddlebreds, Hackneys and Half-Arabians at Orcland Farms, Stonecroft Farms, Sally Dorn Stables, Weaver Enterprises, Stinda Arabians, Hidden Lane Arabians, Legacy Farms, Lowery Stables, and Kenhurst Farm. Mrs. Homer-Brown holds lifetime memberships with the American Horse Show Association, the United States Equestrian Federation, American Morgan Horse Association, Arabian Horse Association, Mid Atlantic Morgan Horse Club, American Driving Society and Western Dressage Association of America. In addition to her affiliation with these organizations, Mrs. Homer-Brown holds 19 judging licenses including her registered pleasure driving judging card with the American Driving Society. She has given clinics in Brazil, Canada, England and South Africa to certify or recertify judges. In Canada, she tested trainers/instructors for certification/approval to train horses or give riding instructions. In 2004, she was awarded Horse Woman of the Year, from the American Morgan Horse Association and the Pinto Horse Association of America Judge’s Hall of Fame. She currently serves as the chairman of the United States Equestrian Federation's Carriage Pleasure Committee. Mrs. Homer-Brown and her husband, Guy Brown, currently are driving a Morgan horses for pleasure and competition at their home in Georgetown, Kentucky.

Jessica wears many hats, a triathlete, mother of two young children, and carriage-driving judge. Jessica Axelsson began her career in horse-drawn carriages working as a commercial driver for the Cape May Carriage Company while in high school. After high school, she attended the Delaware Valley University in Doylestown, Pennsylvania, where she studied driving education and found her passion was competitive carriage driving. One of her mentors at Delaware Valley was Audrey Bostwick. She also worked for several other carriage barns in the Mid-Atlantic region, learning from many top driving trainers. Jessica's driving resume includes driving single very small equines up to six-horse hitches of Belgian draft horses. Currently, she drives ponies and operates a training facility specializing in starting ponies for pleasure driving and helping new drivers get started in a fun and safe environment. Jessica and her crossbred pony have successfully competed at pleasure driving shows on the East Coast including Orleton Farm, Walnut Hill, and Lorenzo. Jessica judges throughout the country, continues to compete and attend clinics, seminars, and lessons with top driving professionals. Her goal is to constantly be working to improve her education and the sport of carriage driving!

​Steve has had a lifelong passion for horses and ponies. He grew up in Oregon, Wisconsin, and started driving at the age of 12. His earliest showing was at the Dane County Fair. He has gone on to train carriage horses and ponies professionally for the last 48 years. During this time, he has worked with many different breeds and turned out everything from singles to coaching teams. He has been fortunate to manage and train for some of the top carriage stables in the country including Robert Weaver, Sally Busch Wheeler, and David Rockefeller. As the trainer for these stables, he trained the winners of the coaching championship 12 of 15 times at the Devon Horse Show as well as coaching championships at the Royal Winter Fair, Walnut Hill Farm Driving Competition, and the CAA Carriage Festival. He has competed himself with singles, pairs, tandems, unicorns, and four-in-hand teams. Steve was also an equestrian entertainer, once sharing the stage with Bob Hope. Steve is an evaluator for the Carriage Association of America's Driver Proficiency Program and was instrumental in working with John Parker in developing the program in the United States. Steve is a former vice president of the Carriage Association of America and is an honorary life director of that organization. He is a recorded "r" judge with the American Driving Society and has officiated at many major shows including the Walnut Hill Farm Driving Competition and the Devon Horse Show. In 2010, he was chosen to be the American judge for presentation at the World Equestrian Games in Lexington, Kentucky. 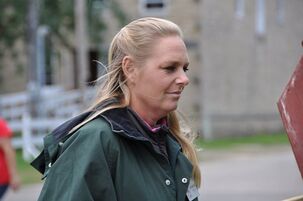 Kail Palmer-Miller, is a Judge/Technical Delegate/Clinician and Trainer. She is a licensed official with the Fédération Equestre Internationale (FEI), American Driving Society (ADS) and United States Equestrian Federation (USEF). She holds “R” status in Pleasure Driving as a Judge and Technical Delegate with the ADS and USEF. She is a “R” Dressage, and Coaching Judge with the ADS. She also holds “Senior Status” for Combined Driving with the ADS, “R” with the USEF as a Combined Driving Judge and USEF Driving Measurement Certification. She recently received her level 2 status with the FEI as a Driving Official.

Kail has been involved with carriage driving horses her entire life. She has competed since the age of eight, driving singles, pairs, tandems, unicorns and four-in-hands in both pleasure and combined driving. She studied ridden dressage with Robert Hall at Fulmer International in Aiken, SC. A car accident in 1996 led Kail to pursue a career judging. Kail served as Chef d’Equipe and Coach for Team USA at the World Championships for Drivers with Disabilities, held in the Netherlands.

Kail has worked with many different breeds and has produced numerous Championships/Reserve Championships in driving and in-hand. She was Coaching Champion at the Devon Horse Show with her family’s team of Hackney Horses. She won the Concours d'Elegance at the Brandywine Carriage Driving Show; she also won the Single Hackney Horse Championship at the Devon Horse Show. She is a member of the World Coaching Club. Kail also has been the organizer and course designer for many shows. Kail travels throughout the country officiating, as well as conducting clinics for all levels and types of driving. Kail enjoys spending time with her family on their farm in Elverson, Pennsylvania.