From Moorpark, California, Jody began driving in 1975. She and her husband, fellow official, Dr. Gregg Cutler, first showed in 1980 at the Ventura County Fair. The Cutlers have shown all sizes of equine including miniature horses and draft breeds. Jody has shown singles, pairs, tandem, unicorn and four-in-hand turnouts mostly on the West Coast. Currently, the Cutlers have 8 Welsh ponies on their farm along with a Warmblood that belongs to the US Driving for the Disabled.

Jody is a past president of the American Driving Society (ADS). She currently holds judging cards with the ADS for pleasure driving, combined driving, coaching and dressage.  Jody also serves on the ADS pleasure driving committee and the United States Equestrian Federation (USEF) carriage pleasure driving committee. Dr. and Mrs. Cutler organize an ADS pleasure show annually on our Oak Run Farm.  In addition, Jody serves on the advisory committees for the California Equine Medication Monitoring Program, US Driving for the Disabled and the Santa Ynez Carriage Museum.  Since her retirement, she spends her limited spare time with the local Rotary Club, training ponies, giving driving lessons and managing a small flock of sheep.

From Greenfield, Texas, Ruth Graves is a lifelong horsewoman who has worked in several equestrian disciplines throughout those years. Her driving experience initially came in the Standardbred industry in her home state of Massachusetts many years ago.

Like so many who become interested in the carriage discipline later in life, she decided to revisit the driven horse after years of competition in a breed environment because she wanted to embrace an equine endeavor that would include her husband and grandchildren. The diversity of breeds suitable to drive and the friendliness of those involved in carriage had a great deal of appeal.

She has since become seriously involved in carriage sports on both the local and national level, as a competitor in both combined and pleasure driving as well as an event organizer and as an American Driving Society (ADS) official with a registered (“R”) card in pleasure driving judging and a recorded (“r”) driven dressage judging card. She served for four years as the ADS Southwest Regional Director; she also served four years as the ADS Licensed Officials Committee Chair. Currently Ruth is a member of the ADS Pleasure Driving Committee and is a member of the ADS Board of Directors.

Ruth has organized the only ADS approved pleasure driving show in the ADS Southwest Region for 16 years - the Cedar Creek Pleasure Driving Event, which has since become the Tejas Carriage Association Carriage Classic, and she has attended multiple Carriage Association of America conferences and learning weekends to further her education in the traditions of carriage driving.

For over 10 years Ruthie has organized an annual day of educational carriage related seminars that have served to introduce beginners to carriage sport and have given experienced drivers, interested in improving performance and knowledge, opportunities to learn about many carriage driving topics.

Ruth actively competes in as many pleasure driving shows as time and distance allows and does her best to encourage the development of more pleasure driving shows, especially in the ADS Southwest Region.
​
Ruth is passionate about educating potential drivers to assure safety and full enjoyment of this wonderful horse sport, and feels pleasure driving competition has much to offer all carriage drivers in the diversity of classes offered and the expression of our beautiful traditions.

Kacy has been involved with horses all her life.  Her father, a rancher in South Texas put her on her first horse at age 2 and that was how it began.  Until 21 years of age, Kacy was in the rodeo circuit every weekend all over the state of Texas.  In 1997 while in college, she was asked by the Morris family of Stewart Title to work part time for them during the summer.  Within 6 months she was driving their pair of horses all over the state giving carriage rides to clients.

In 1999, Kacy moved to Florida to work at Continental Acres, which is now known as Grand Oaks Resort.  It was a great opportunity to be able to travel the United States and Europe grooming for Gloria Austin.

In 2008, Kacy became the Equine Manager at the resort where she oversees all day to day activities, equine staff, horses and equine events.  Working at Grand Oaks Resort has given her the opportunity to show her driving skills in public events, outings and shows.  Kacy gives single, pair, tandem and 4-in-hand lessons at the resort.  She has also completed her Level 3 Carriage Association of America Driver Proficiency Evaluation and is currently a Level 1 Evaluator.  In 2014, Kacy received her pleasure driving judge’s license through the American Driving Society and United States Equestrian Federation. 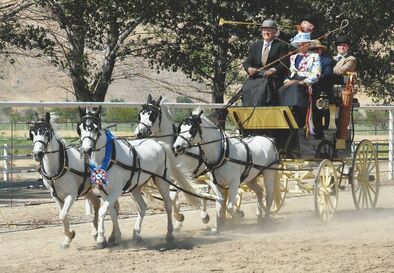 Dr. Cutler grew up in the suburbs of Los Angeles, California.  When Jody and he were dating, she took him to the Grand National Horse Show and Rodeo in San Francisco, California.  While there, he saw Hackney Ponies being driven and was hooked with the idea of driving horses.  The Cutlers moved back to Southern California after Gregg finished veterinary school in 1974.

Dr. Cutler aspired to restore antique automobiles, but a lack of mechanical fortitude, rendered that ambition lost.  The Cutler’s neighbor, however, had a carriage restoration business and thus made a perfect project for Gregg.  The Cutlers, at that time, had just one horse and driving the restored carriage gave them a way to enjoy the horse together.  Since the first restoration, the Cutlers have restored several vehicles and have owned horses, mules, a donkey and Welsh ponies.

Over the years Gregg and Joy have both driven and shown singles, pairs, tandems, unicorns and a four in hands.
​
Dr. Cutler enjoys officiating as a way of helping new and less experienced drivers.  A lot of what he learned early in driving was via trial and error or from driving books.  As a technical delegate, he hopes to make it easier for the drivers, passengers and horses to have a good, safe time at events.